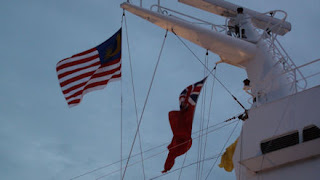 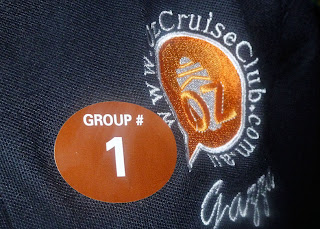 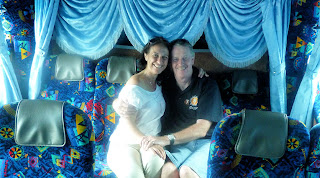 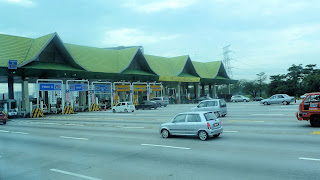 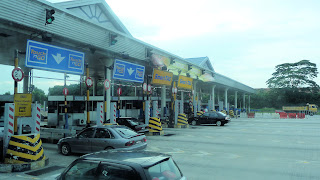 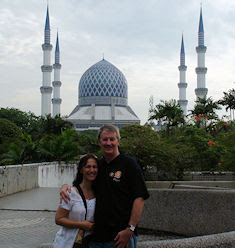 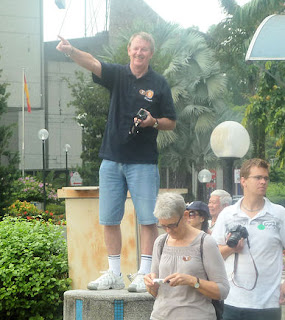 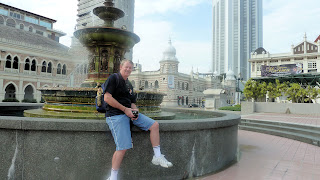 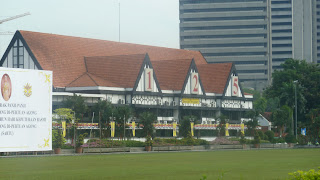 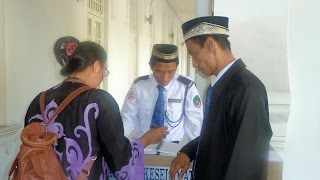 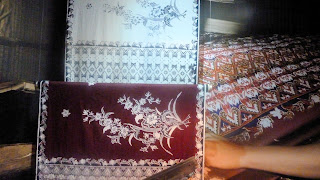 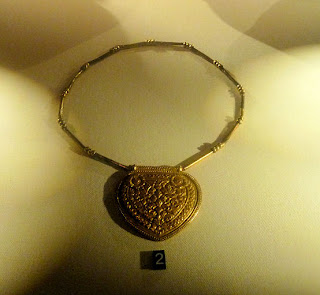 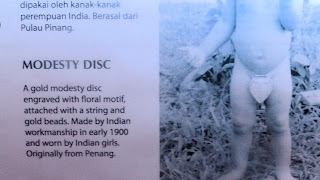 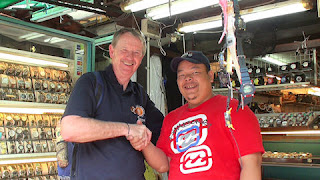 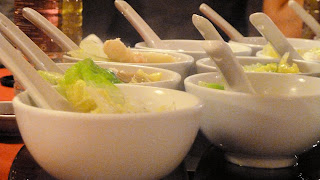 This is the first port that we had a Princess Tour booked.. We did the Kuala Lumpur Walking tour.  This was also another port where we had our time cut back by an hour due to engine problems.  With the usual princess procedure we had to meet in the wheelhouse bar at a  specified time and then you are convoyed out to your bus...  the trip into KL was going to take about 90 mins.  The buses are these lovely air-conditioned modern buses with a touch of Malay.... that being the scallop curtains around the windows....

Photo 2 Our sticker was Brown 1..... Garry nicked named us “ The Brown Cows “ as that is probably how we will be walking around Kuala Lumpur

Photo 3  Don’t you just love the back seat.... I nicked named it “The Love Shack”

Photo 6 Our first stop was a vantage point for the Blue Mosque... named appropriately for its Blue Dome.  I think all the buses on the way into KL stopped here for a photo opportunity.

Photo 8 - 9 Next we were dropped off at Independence Square in the middle of town.  For all the rundown buildings, construction and road works, the gardens and lawns are all beautifully manicured.. In what other country would you find Topiary trees down the middle of the motorway?

Photo 10 – 15 From there we crossed the road and visited the National Textile museum.  I had forgotten this and was really excited to see how the different fabrics are woven and printed.  Picture this ... main road down the middle of KL, 30 people all waiting at the corner for the lights to change... after several changes and still no green walk lights, Loh, our tour guide decided it was do or die on this corner... So with her hand up in the stop position she walked out in front of the cars and like Moses parting the red sea she cleared a path for us to get across.  We liked Loh, she always had a story to tell... after spending 11 years in Germany studying Architectural engineering she decided she really liked being a tour guide.

One of the highlights of the museum was what we called the Bling Room... here they had on display some lovely old pieces of ornate gold jewellery. I was admiring this lovely heart shape pendant on a large link choker type chain... Said to Garry I would like one of those.....  I then decided to look down and read the information that went with it... it was actually a modesty disk and there was a picture of this young 3 year old boy wearing my beautiful necklace around his waist where the heart strategically  fell so to cover his genitals ....  Garry wanted on  but they didn’t have one big enough

After the Museum we walked up to Chinatown and visited a Chinese Temple, here we told about their beliefs and superstitions.  You can pray to a god to find a husband, pass an exam or get rid of someone you don’t like.  You can even crawl underneath one of the benches to ward off bad luck.  We sent a few passengers under so we will have some good luck in hope that the ship will make it around the rest of the world.

Photo 17 After the Markets we were off to lunch in one of the hotels... we had a lovely 10 course Chinese meal and a well earned rest in air-conditioning....

Then one last stop at the Petronas Towers... all we could say as we stepped off the bus was WOW and then picked our jaws off the ground... what a spectacular sight.....I raced into the shops and Garry raced down the street for a good vantage point for videoing.  We were lucky have 45 minutes at this stop....

The only thing I think we all saw on the 90 min drive back to port was the back of our eyelids....

You might have read from one of the other blogs that the policy for alcohol that they are enforcing is 1 bottle of wine or 6 cans of beer.... That little duty free shop in port Kelang was making a killing the the girls couldn’t keep up  as they quickly filled plastic bags with 6 cans of beer for each person.... wine had run out ages ago...

A lot of laughs again at dinner that night but the only show we all went to see last night was the blanket show as there were some really tired puppies at the table last night.